What’s Really Behind the So-Called “War on Drugs?” Profits and Control. 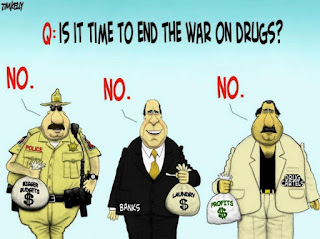 What’s Really Behind the So-Called “War on Drugs?”

There is perhaps no issue that misleads, confuses and bedevils concerned citizens of all political stripes than the so-called "War on Drugs." The Republi-crat government oligarchy is well aware of this fact, and so it uses a trumped-up, false war on drugs to deceive the masses, to deceive and to wear out taxpayers, to paramilitarize and enlarge law enforcement and government, and to promote the two-party/left-right/conservative-liberal false paradigm.

The war on drugs is not a war by public officials against criminals at all, but a war for drugs. It is the way public officials profit from criminality, expand their kingdoms and overrule the rule of law and the Constitution. In my unending research into this conspiracy, I have learned that this kind of tyrannical control is possible only by mass deception. It is a total control over governmental and political processes to the detriment of the people in every category of the nation's and local interests. It is raw power exercised by today's single-party-dressed-as-two.

False, universal religion is the chief means of this mass deception, followed by the protection of particular elements to induce confusion, including drugs and the "war on drugs," a controlled mass media to spread government propaganda, and politics-as-usual non-solutions.

Government strategy is to invade our privacy and freedom under the pretext of protecting us from terrorism, drug traffickers and all kinds of booger bears. Politicians-as-usual all protect and enlarge the government's drug trade while pretending to do precisely the opposite. Such "opposite behavior" is the proof of a conspiracy against Americans.

Republican politicians, for example, profess pro-Christian, anti-big government ideals but join the Democrats in faith-destroying, socialist legislation to expand the welfare state. The "war on drugs" helps justify it. Democrats, for example, claim to protect the working man while joining Republicans and multinational mega-corporations to pass "free trade" legislation, thus destroying the middle class, farming families and the American industrial and agricultural sectors. 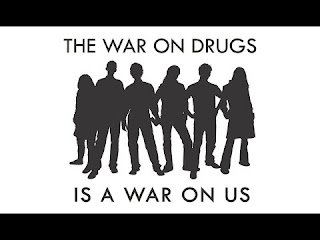 The war on drugs is used as justification for the passage of a host of liberty-stealing laws. A few among the many are these:


The war on drugs has resulted in a rising militancy and militarized gestapo-like mindset among LEOs (legally entitled to oppress) from the local, small town street cop to the FBI to the Drug Enforcement Agency.

Attorney General Jeff Session is a big fan of asset forfeiture, the process by which LEOs confiscate people's money and property for their own personal use. Innocent civilians whose only crime is having in their possession more money that the LEOs think is warranted at the time, lose their cash, their cars and even their houses without ever being convicted — or even charged — with a crime; all under the auspices of the war on drugs.

The drug war corrupts the justice system. In 2013, workers at the Massachusetts crime lab were caught conspiring with prosecutors in that state by tampering with samples and intentionally forging signatures. As many as 40,000 cases may have had their evidence tainted. Chemist Annie Dookhan pleaded guilty to all 27 counts of altering drug evidence and obstructing justice that prosecutors had filed against her, was a crime lab chemist for nine years. Her tampered evidence has put thousands of innocent people behind bars, and thousands more have had their sentences lengthened based on her fake "evidence."

Following Dookhan's guilty plea, a second Massachusetts crime lab "chemist" was been fired after investigators determined she had fabricated her educational credentials. Kate Corbett worked alongside Dookhan and testified as a "chemistry expert" in dozens of court cases that led to convictions — even though her degree is in sociology. Defense attorneys argue that as many 180,000 Massachusetts drug cases may be tainted by the two women's actions.

The federal government has been known to pick winners and losers in the Mexico's drug war by allowing some cartels free reign to commit murder within the United States and transport multi-ton quantities of drugs across the U.S. border with impunity. These revelations come from emails hacked from the security firm Stratfor and released by WikiLeaks and from Federal court filings.

In the emails, a Mexican diplomat dubbed MX1 wrote that both Mexican and American authorities have been negotiating deals with the larger cartels, tolerating their cross-border trafficking and encouraging them to take out the smaller cartels in the belief that fewer cartels would be able to negotiate their differences peaceably. "They want the CARTELS to negotiate with EACH Other. The idea is that if they can do this, violence will drop and the governments will allow controlled drug trades," the email stated.

Another leaked email from a federal law enforcement supervisor stated: "Regarding ICE [U.S. Immigration and Customs Enforcement] screwing up informants: They [ICE] were handling big hit men from Juarez and letting them kill in the U.S."

In Federal court filings, Jesus Vicente Zambada-Niebla (said to be the "logistics coordinator" for Sinaloa, a major Mexican cartel) claimed the U.S. government had offered his organization virtual immunity to import tons of drugs across the border. He also claimed that in exchange for information on rival cartels, the Sinaloa cartel was armed by federal agents and aided in avoiding Mexican authorities.

The "Fast and Furious" gun running scandal under President Barack Obama and Attorney General Eric Holder also armed drug cartels, and those weapons have been used in numerous crimes including the murder of American border agents and the robbery and murder of American citizens in the U.S.

The U.S. military, since the beginning of the war in Afghanistan, has stood watch over Afghani poppy fields and turned a blind eye — when it wasn't directly facilitating them — to the operations of Afghan drug traffickers. Afghanistan provides 90 percent of the world's supply of opium poppy, making the U.S. government a co-conspirator in the rising U.S. opium epidemic along with the prescribing physicians and the legal U.S. drug cartel known as Big Pharma. 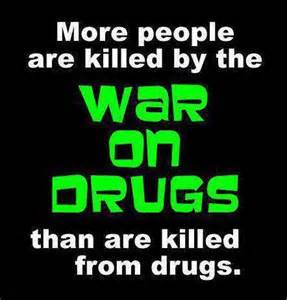 The CIA has a long history of trafficking in drugs to fund its operations.

There are about 2.3 million people populating America's 1,719 state prisons, 102 federal prisons, 942 juvenile correctional facilities, 3,283 local jails and 79 Indian Country jails as well as in military prisons, immigration detention facilities, civil commitment centers and prisons in the U.S. territories. In the U.S., people go to jail about 11 million times each year. Another 7 million are on parole or probation.

There is no question that America is a prison nation, and the overwhelming majority of people in prisons are there for non-violent crimes — about 20 percent of them for drug crimes. One in three Americans will be arrested by the age of 23.

The faux war on drugs has ensnared millions of Americans for the non-crime of possessing parts of a plant.

The war on drugs is sham and a scam and federal agents, federal agencies are corrupted by it, as are states and municipalities and their LEOs. Meanwhile, U.S. prisons and cemeteries are overflowing with the victims.

The constant success of government criminality in this regard is so staggering that one can only conclude that the DOJ and its controllers in Congress and the White House are satanic. The United States of the Constitution is dead; "Long live the United States!," cry the deceived masses and their rulers.

NOTE:  Our current AG, Jeff Sessions seems to be attempting to turn the clock back on drug laws and he endorses laws which allow governments at all levels to seize private property [so-called asset-seizure 'laws'] without due process...something that would make our Founders puke. CO drug laws seem to be working and are generating a windfall of cash for its government without any appreciable uptick in crime while enhancing the number of jobs in that state.  In my opinion, it is a good way to fight the Mexican drug cartels...In the past 30 years state governments, taking a cue from Native American tribes, have legalized gambling and have dramatically increased tobacco taxes...all the while frittering away those tax revenues.


Warning: ‘They Need The Markets To Implode’ To Usher In Cashless System


Market analyst Lynette Zang predicts in the next market meltdown, “real estate, stocks, and bonds will all crash.” When asked when this will happen, Zang says, “Enjoy your Christmas,” but in 2018, all bets are off.


4 Ways to Cash a Check without a Bank Account
No bank account? No problem. You can still cash that check.

How to Waste Sudden Wealth
Don't let 'found' money slip through your fingers.

Be Radical, Get Rich
Want to know how to get rich? Stop being average!

The Easy Budget
This trick makes budgeting so easy anyone can do it!


14 of the best reports I’ve assembled on protecting your freedom-Download link.

Posted by Poor Man Survivor at 7:31 AM

Email ThisBlogThis!Share to TwitterShare to FacebookShare to Pinterest
Labels: deceiving the masses, government war on civil rights, lost rights and the drug war

I haven't trusted the government since the 70s...they are devious and greedy and controlled by Wall Street and bankers.

My daughter is making a small fortune here in CO where it is legal and so is the state, collecting a Billion dollars before the end of its first year. If the idiots in DC would get their head out of their ass and legalize it they too could get in on the gravy train.