Defending Yourself with Make Shift Weapons

Be polite, be professional, but have a plan to kill everybody you meet.” –General James “Mad Dog” Mattis 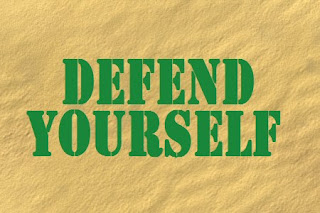 Defending Yourself with Make Shift Weapons


While rare, violence often strikes when you least expect it. To counter violent attacks, you need to be fast and furious. Hand-to-hand combatives are a great tool to have up your sleeve to quickly dispatch an attacker, but you should always be looking for force multipliers—tools that make your counterattacks even more painful, damaging, and effective.


Having some sort of defensive weapon—be it a firearm, knife, or spray—as part of your EDC is never a bad idea, but sometimes you don’t have one on you (like when you’re in an area that prohibits weapons), your attacker has taken or knocked your weapon away, or you’re in a position that makes drawing your weapon hard to do.


Thankfully, you’re constantly surrounded by potential weapons that can be quickly accessed to counter violent attacks. To find and employ them, you just need to hone the most important weapon in your arsenal—your mind.


In the right hands, seemingly innocuous, everyday items can be turned into lethal weapons. Such a transformation just requires violating those objects’ Aristotelian telos—the end for which they were made. If your life is on the line, I don’t think old Aristotle would mind.


Below we offer 12 suggestions of everyday objects that can be turned into improvised weapons. Use this as a jumping off point to think of how other objects could save your life in a pinch. When you’re out and about in public, practice scanning your environment and considering what might be used as a weapon if needed. Think of it as creating mental models for your OODA Loop so you can win the fight if/when it comes your way.


Pot of Coffee
There’s nothing like the smell of coffee brewing when you first wake up in the morning. And if you’re ever attacked while pouring your cup of joe, you can take comfort in the fact that you’re not just holding something wonderfully fragrant, but a great weapon as well.


Smash the pot into your attacker’s face. The blunt force will stun him, the shards of glass will embed in his kisser, and the scalding hot coffee will make him wish he stayed home that morning. 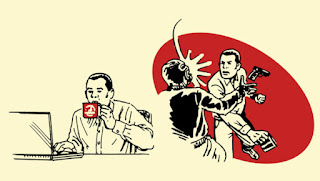 Fire extinguishers cannot only save your life in a fire, but in a violent attack as well. Spray the assailant in the face to temporarily distract him and disrupt his OODA Loop. While he’s figuring out what’s going on, forcefully bludgeon him in the head with the extinguisher’s canister.

In the right hands, the pen can indeed be mightier than the sword. A stainless steel pen like this Zebra number can be used to stab an assailant. Hold it with an overhand grip and aim for vulnerable parts of the body like the face and throat. If you really want to up your writing-implement-as-weapon game, get a true tactical pen like this Smith & Wesson.

Your keys can start your car or let you into your house. They can also savagely maim a violent attacker. Hold the keys in your hand so their points are coming out between the fingers of your fist. Proceed to punch your attacker in vulnerable parts of the body like the face and throat. 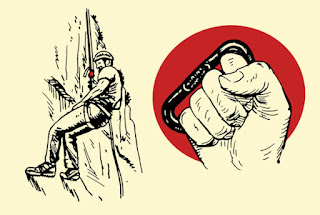 Carabineers are an important tool for mountain climbers and have become a go-to key holder for action-oriented gents. They can also serve as field-expedient knuckledusters in a pinch. If you want to use a carabiner as an improvised weapon, make sure it’s big enough to fit around your fist and has a locking collar (to prevent it from snapping open while you punch a mo’ fo’). While aluminum carabineers should be able to withstand the impact, for added strength, use a steel one.


For a variation on the above, turn your metal wristwatch into a quick-n-dirty knucklebuster by holding the bracelet inside your fist, and positioning its face across your middle knuckles. James Bond uses his Rolex Oyster Perpetual in this way to knock out a bad guy in On Her Majesty’s Secret Service. Keep in mind that the impact of this move will likely break your timepiece. Bond was able to write off the destruction of his watch to his expense account. You won’t. Of course, losing your wristwatch will be a small price to pay if it saves your life.

An aluminum water bottle helps you stay hydrated while avoiding all those testosterone-lowering xenoestrogens found in plastic bottles. It can also be used to inflict blunt force trauma on a violent attacker. Ideally, you want the bottle to have some liquid in it in order to give your makeshift club more heft and weight. Bash your assailant’s head and face with it.


If you’ve got some time and if your bottle has a key ring, put your belt through the ring and tie it off. You’ve got yourself a medieval flail. 
First, you can use a belt the same way parents used to employ it on their kids back in the day—for whoopins. But unlike its use in dishing out old fashioned corporal punishment, you’re not going to hold back on your attacker. Give him the ass whoopin’ of a lifetime. Make sure he gets the buckle end of the belt. Aim for the face. The advantage of using a belt as an improvised bludgeon is not only the significant damage it can inflict, but the distance it allows you to put between you and your attacker.


The second way you can use a belt as a weapon is as a force multiplier when strangling an assailant. 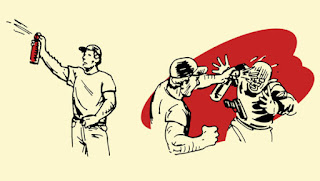 We got this improvised weapon idea while interviewing Navy SEAL Clint Emerson. Hornet spray is pepper spray on steroids. The former can usually shoot up to 20 feet and provides a much more directed stream than you find with the latter. What’s more, the chemical used in hornet spray is much more potent than pepper spray and can potentially permanently blind an attacker.


Keep in mind, that due to the possible maiming effects of hornet spray, one should only use it in life-threatening situations (like during a home invasion). Using hornet spray as an everyday self-defense tool is illegal in most jurisdictions.  [We keep a can by every door in our house].

Every man should not only carry a flashlight, but know how to use it in a tactical scenario. Not only can it help you find stuff in the dark and act as a deterrent to would-be attackers, it can also be used as a weapon. Maglite Heavy Duty D Cell flashlights make for a great makeshift billy club, and many specialized tactical flashlights end with a serrated or toothed bezel that can be used as an improvised striking device during an attack. After you’ve shined the bright light of a high-powered flashlight in your attacker’s eyes and disoriented him, strike his face with the toothed bezel as hard as you can. The motion should be like forcefully stamping him with a giant rubber stamp.

Today’s smartphones have been designed to take a beating; consequently, they can used to give a beating.


Tightly grasp your smartphone in your hand and slam the edge and corners of it into vulnerable parts of the body like the eyes, nose, and neck.


You could also put your phone in a sock or other piece of clothing to make an improvised sap—a weighted impact weapon.


Whether you’re at home, the office, or out on the town, everyday objects that could be turned into weapons are all around you. Should you find yourself facing a violent threat, be ready to grab something and win the fight. 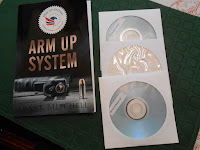 
It is a crazy world out there with plenty of violence and everyone knows you that under most circumstances, police usually arrive after the fact.  Your rights to defend yourself are often under attack, even for non-lethal self-defense tools especially in states in like California.


It is amazing that someone should need ‘permission’ from the state to defend themselves, but as I said, we live in crazy times.


This package includes the acclaimed softbound book The Arm Up System – Defense Without Regulation, which covers:


What To Do if the Dollar Collapses, Unintended Consequences, Final Days of the Dollar Secrets and More.


#4 Alive After Crisis - a comprehensive guide for emergency planning and crisis survival - a printed manual also included with this survival package.

The Anatomy of a Breakdown

The Prepper’s Blueprint: The Step-By-Step Guide To Help You Through Any Disaster


Visit our friends at the Health Ranger Store 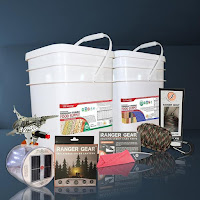 Posted by Poor Man Survivor at 7:16 AM

With the rise of nut cases seemingly everywhere, this is great information!

Enter your shipping address and get your free STRIKEPEN™, complements of Ape Survival™.

They are giving away 700 of their Premium Tactical Pens, you just need to tell them where to ship it!

To get yours, ENTER YOUR SHIPPING ADDRESS HERE.

The STRIKEPEN™ makes for the perfect self-defense tool:

It’s discreet, compact and easy to carry yet is solid enough to pack a brutal blow that will knockout any opponent. Plus, it’s a fully functional pen you’re going to use every day.

But if you want one, you need to act now because the last giveaway only lasted 2 hours before stock was gone.

To get your free STRIKEPEN™ enter your shipping address here.

To a safe future,

P.S. Over 2300 STRIKEPENS have already been shipped out so these last 700 won’t last long!

>> Get your STRIKEPEN™ while they’re available <<

P.P.S. Just so you know, the last 700 have been reserved for our subscribers only (This means YOU!) So, don’t miss your chance because they’re going to go very fast!