Are Americans Still Self Reliant? 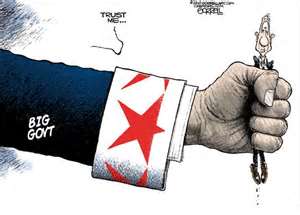 
“And so the reliance on Property, including the reliance on governments which protect it, is the want of self-reliance. Men have looked away from themselves and at things so long, that they have come to esteem the religious, learned, and civil institutions as guards of property, and they deprecate assaults on these, because they feel them to be assaults on property. They measure their esteem of each other by what each has, and not by what each is.” >>Ralph Waldo Emerson


Self-Reliance…is it a lost art?

Whatever happened to self reliance among Americans?

Americans seem to have become so reliant on their government, financial institutions and corporate employers that they live in a state of constant fear, lest the whole edifice come crashing down.

Self-reliance was the hallmark of the American people for most of this country's history. Our forefathers had to have very high self-reliance skills or we would not be here today. Only in the last few decades have we slipped into the complacent position of letting someone else take care of us.

It has become apparent that the average American has lost their sense of independence. Moreover, it seems that our government has been encouraging the dependence of the American people, on government social programs. Furthermore, the government has been successful in this venture because most schools no longer encourage self reliance or personal initiative – indeed, they teach children what to think, not how to think for themselves.

Every school aged child should be required to read Ralph Waldo Emerson’s essay on self reliance, Harry Brown’s How I Found Freedom in an Unfree World, and Thomas Paine’s Common Sense.

Self reliance often means a plan for living within your means.  Here are some tips.

Keep skunks and bankers at a distance. 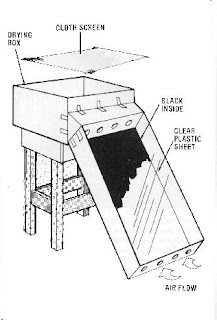 Made from two cardboard boxes, some clear plastic wrap, and a little tape. You can build a nearly free solar dehydrator. Set it on a stool or chair and face it's solar collector towards the sun, and you have a functional food preservation machine for little work and even less money.

The above picture almost says it all. Using a long thin cardboard box for the collector and a taller, nearly square, cardboard box for the drying box. Boxes could be made to size by cutting and taping together small cardboard pieces. Line the bottom of the collector box with a black plastic garbage bag or paint the bottom with black, water based, poster paint, (lamp black or soot mixed with a little vegetable oil would work as well). If you use spray paint or other toxic paints, let the collector bake in the sun for a day or two before use. Cover the top of the collector with clear plastic wrap or window glass, etc. Tape it together as shown.

To increase the efficiency, you may want to cover the sides and bottom of both boxes with fiberglass or styrofoam insulation.


Rely on appearance and feel to judge dryness.
Cool a test handful a few minutes before deciding whether the food is done.
Consider fruit dry when no wetness can be squeezed from a piece which has been cut - it should be rather tough and pliable.
Consider vegetables dry when brittle.


Steam blanching is safe pre-treatment which can prevent spoilage - especially of low acid foods such as vegetables.


Ensure food is thoroughly cool before storing.
Store in small quantities in glass or food-grade plastic.
Check supplies frequently for contamination or dampness.
Keep in a dry, cool place (between 4 C/40 F and 21 C/70 F).


Fruits - cover with boiling water in saucepan and simmer the fruit covered for 10-15 min.
- sweeten to taste at the very end of cooking.
- remove from heat and cool still covered Vegetables.
- soak all vegetables except greens in cold water until they are nearly restored to their original texture.
- use only enough water to cover and always cook in the soaking water.
- cover greens with enough boiling water to cover and simmer until tender.

From Introduction to food drying

You can make good money running a home-based business! Check out this article by John Frainee (self-employed at home full time) on 21 ways you can make money on your own:
http://christianpf.com/?p=10399


Did you know that your garden could double as beautiful landscaping?
read more here


H.R. 748 would require all persons in the United States between the ages of 18 and 25 to perform national service either as a member of uniformed or civilian service. Civilian services include federal, state, and local government programs. But most frighteningly, this house resolution would "authorize the induction of persons in the uniformed services during wartime to meet end-strength requirements of the uniformed services..."

US Representatives Ted Poe (R-TX) and Zoe Lofgren (D-CA) have
introduced the "Preserving American Privacy Act of 2013," a bill
designed to provide individual privacy protections against drone
surveillance. The bill requires all US drone operators to submit a
public data collection statement that includes a description of the
drone's purpose and intended operations. The bill also requires a
warrant in order for drone surveillance information to be received as
evidence, and includes a ban on equipping drones with firearms. EPIC
twice has asked Congress to protect individual privacy against increased
use of domestic drones.

How To Kill A Drone: Since Drones Can Kill Americans, Americans Can Kill Drones, Here’s How


The Parting Thought- the international sham

Fraud is the crime of misrepresentation that causes harm.


The US bankster economy uses fraud to transfer trillions annually from We the People to them. This criminal “1%” represent our “debt-supply” as a “money supply,” represent bank debt that they made out of nothing as “loans,” and represent escalating government debts as having no solutions except our austerity rather than presenting obvious solutions. This fraud costs Americans increasing work (if they can get work), increasing debt, inflation, deprivation of public services, and a transfer of wealth to a criminal-colluding 1% that hide ~$20 to $30 trillion in protected tax havens. About one million children die from preventable poverty every month from “developed” nations’ reneged promises for annual investment equal to one-half of one percent of this tax-free wealth for about ten years. Ending poverty reduces population growth in all historical cases, and according to the CIA is the best way to end terrorism.

You therefore recognize that US Presidents, leadership of both parties in Congress, and corporate media all act and lie for the worst crimes imaginable for a nation to commit. They do so relentlessly and increasingly. In case you consider state-level “leadership” of our Left and Right arms of fascism any better, they lie and hoard literal billions and trillions in surplus taxpayer accounts while demanding our austerity. This is what the CAFR scam is about.


The lawful response to these crimes is immediate arrests, not mere consideration of impeachment committee consideration or media banter about proper leadership. For four years I’ve offered Truth and Reconciliation for these criminals that is still open; my colleagues and I receive silence and escalated criminality that kill millions, harm billions, and loot trillions.


The rule of law is meant for all to understand, and that if we can master rules in sports we MUST MASTER AND ENFORCE rules that millions and billions of human beings rely upon people of good hearts and minds to uphold.

Excerpted from our friend Carl Herman, contributor to our How to Take Back our Country series…

Join others striving for Financial Independence in the Poor Man Survival community on how to take back control of your money. Updated for 2013 and now includes a Will Kit. 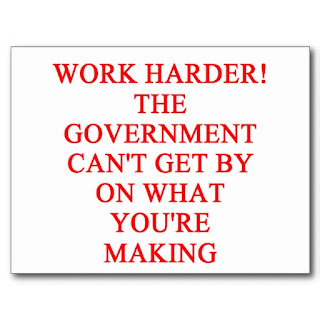 A Shallow Planet Production
Posted by Poor Man Survivor at 6:01 AM

Self reliant? Most Americans are sheep, dummied down by state run schools...our country will be lucky to survive as a free nation for another generation.