When Nations Go Bankrupt, They Always Resort to... 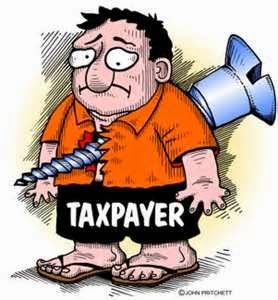 "Nine tenths of everything is tax.


Everything you buy has a complicated history of robbery: land, raw materials, energy, tools, buildings, transport, storage, sales and profits. Don’t forget the share you contribute toward the personal income tax of every worker who has anything to do with the process. Inflation by taxation: there are a hundred taxes on a loaf of bread. What kind of living standard would we enjoy if everything cost a tenth of what it does? What kind of world? Think of your home, your car, your TV, your shoes and even your supper—all at a 90% discount! Government can’t fight poverty—poverty is its proudest achievement!"
-- L. Neil Smith


When nations go bankrupt, They almost always resort to plundering their citizens

Do you ever look around and think, "This is not the country that I grew up in..."?

So many people are making this realization.

• President Obama quietly signed an Executive Order that gives Homeland Security the ability to control and shut down the nation's communications systems upon the President's request.

• According to a recent IRS report, "tax requirements have become so confusing and the compliance burden so great that taxpayers are giving up their U.S. citizenship in record numbers"


• The US government has brazenly continued its arrogant domestic spying program despite overwhelming public opposition. So much for a government "for the people"...

These are the facts, uncomfortable as they may be.

But we are programmed practically from birth to deny this. Most of us grew up thinking that "this is the greatest country in the world, we could never fail."

Look around. It's not the country you grew up in. The nation’s leaders have forgotten who they are supposed to serve.  It is happening at all levels, federal, state and local.  At every level our privacy, freedoms and liberty are being whittled away at an accelerated rate.  We can no longer afford our burdensome government.

We all have survival instincts. And most likely, your instincts are telling you that something has gone terribly wrong in the system.

My suggestion is that it's time to move things to the next level. Because even if the system is beyond repair, that doesn’t mean that you have to be a victim.

Think about it: when every shred of objective evidence suggests that our country is in decline, doesn’t it make sense to consider your options?


Polls show more than 57% of Americans feel we’re already in decline, on the wrong path, that we have the worst leadership ever…are you simply standing by with blinders on or are you doing something to protect yourself and family?


The solutions to surviving the war on the Middle Class can be found in our new e-book.

Posted by Poor Man Survivor at 7:13 AM