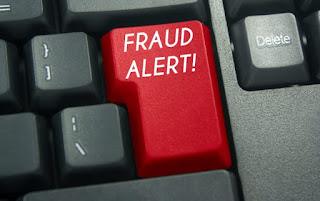 Tuesday, November 3, was supposed to be a blowout for Democrats. In the final weeks leading up to the election, the pollsters and media either committed purposeful malpractice or didn’t know what they were doing. Regardless, they attempted to frame the election as a country on edge, which no longer believed in or trusted Donald Trump and Republicans.

They were sorely disappointed. As the numbers rolled in-the socialist left and their supporters [globalists Soros, Zuckerberg, Bloomberg, Obama contributed over $500 million!] resorted to chicanery to realize their theft including tossing of vote ballots, surprise accounting of ‘mystery’ ballots that were 100% for Biden [100K in MI-a statistical improbability] all of which point to cheating.  Can’t say we weren’t warned.

In either case the nation may be headed for Civil War and many have armed up…here are some resources you might find handy. 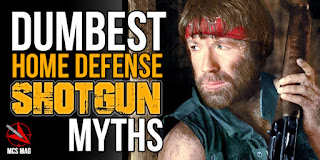 Myth #1: Racking The Pump Is Terrifying

This is definitely one of those myths that started out in the movies.

The hero, a Chuck Norris type with a steely gaze and "tough guy" attitude, steps into the room and racks his pump-action shotgun:

The bad guy wets himself, drops to his knees, and pleads for mercy... and you're supposed to expect a home invader to do the same.

(That's why a lot of "gun guys" recommend the 12-gauge pump for home defense - because of that "pucker factor" from the pump action.)

Unfortunately, in the real world - especially when the bad guy and you both are experiencing the adrenaline "fight or flight" rush - he might not even hear the noise your shotgun makes.

(After all, sometimes people get shot or stabbed in a fight and don't even realize it until after the fact - so you can ka-chunk ka-chunk all day long and he may never notice.)

If you rely on scaring him with your pump-action, he may just be on top of you before you realize it.

I gotta admit, this one grinds my gears every time I hear it.

As the guy says in that movie, "Every word of what you just said was wrong."

If you're close enough (like, practically on top of somebody) for birdshot to "work," it penetrates just as much as any OTHER size shot.

But get even a little bit farther away and this fine, dust-like shot doesn't do much at ALL.

Heck, remember when Vice President Dick Cheney shot one of his hunting buddies in the FACE while they were hunting birds?

The poor old guy had a heart attack... and STILL survived, because bird shot simply ISN'T effective from, say, across your living room (you know, the distance where you might have to shoot a home invader).

If you rely on birdshot to stop an attacker, you might as well be throwing table salt and bad language at him. Note: we do have a stockpile of less-lethal & non-lethal rock salt/pepper spray shotgun shells for use as a deterrent. If that fails, we can use slugs - which are VERY lethal]

Ok, I'm exaggerating... but think of it more like the difference between throwing a softball sized rock at someone vs. a handful of pebbles... both could "hurt"... but only one is likely to knock you out.

Now, I'm not trying to build a "straw man" here.

I don't know of any shotgun shooters who think they don't have to aim at ALL.

But a lot of "gun people" think they only have to point the weapon in the general direction of the target.

That's not true, and if you believe that myth, you're going to miss.

Even at "living room home defense range," the spread of buckshot is literally only a few inches apart - NOT the wide spray pattern you see in the movies.

Besides, you're responsible for every single one of those pellets and the more that miss their target, the more chance you have of hitting an "innocent" - including a loved one in another room.

No, you've STILL got to get your gun on target properly if you're going to hit the bad guy.

But that means you've got ANOTHER problem, because it's almost like the people who make shotguns believe the no-aiming myth too.

You see, most shotguns have a bead sight - just a little dot of metal at the tip of the barrel - and not much else.

Now, I use a 20 gauge semi-auto shotgun for home-defense, and on that gun I've got a tritium front sight that kind of serves as my "backup sight."

For my primary sight, though, I need something that will let me get my shotgun on target FAST, but ACCURATELY.

That's where my red dot comes in. 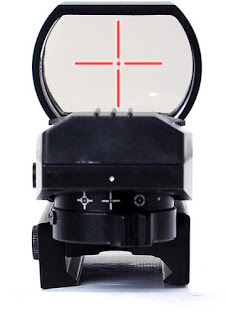 The red dot sight lets me get the gun on the bad guy, quickly, with enough accuracy to get the job done.

That's why I highly recommend this set-up for your own home-defense shotgun.

Now, you could spend a bundle on a good red dot (and if you can afford an expensive one, go for it).

If you want a more affordable option, though, MCG has one that I like:

You can check out its features on this page (and it's suitable for just about ANY gun, from shotguns to pistols to even airsoft guns).

No matter what red dot you get, though, it's going to be an improvement on the factory shotgun bead sight... and that's what matters. 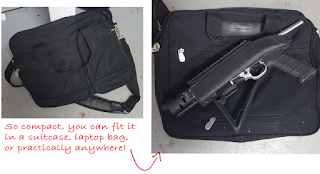 The Argument For “Subtle,” “Understated” POWER

“Matt Helm” was said to favor the .22 pistol, and when he has to start carrying his agency’s issue .38 revolver later in the series, he isn’t happy about it.

HIs reliance on the .22 is something you see in lots of assassin and gangster movies.

But have you ever thought about WHY the mystique of the .22 survives?

It’s because the humble, common .22 Long Rifle kills more people every year than any other cartridge.

(At least it did before you had to practically sell your first born to get more of the stuff.)

It’s a fact that the .22 is a versatile survival cartridge, too.

You can hunt with it… quietly.

You can defend yourself with it by accurately placing multiple rounds.

With almost no recoil, you can keep it on target easily.

And even if you’re shooting without ear protection, the little round won’t make your eardrums bleed.

It doesn’t make a lot of noise, and people don’t think of it as super deadly…

...but it’s a lethal, multipurpose round, especially if you combine it with a tried and tested platform like the classic Ruger 10/22 rifle.

We’re covering the top takedown rifles of 2020, including the conventional .22 LR series made popular decades ago, and newer pistol-caliber and centerfire rifle variants.

NOTE: None are cheap, especially compared to the first one I purchased from Sears in 1969 at less than $75!

*I just purchased a used 'Junior" .22 rifle at a local auction AND even that cost me $67 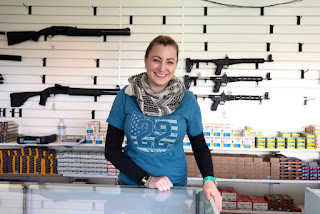 Let’s start out with a simple fact: Contrary to what you may have heard, ammunition does have a shelf life and will go bad eventually.

Here’s another simple fact: Ammo is not cheap and adds up quickly, especially when you purchase ammunition in bulk. If you want to protect your investment, you'll want to extend your ammunition's shelf life for as long as possible.

Proper ammunition storage should become an even greater concern for you when considering that ammo shortages happen fairly regularly. And one day, there could be a major disaster that severely reduces ammunition production for a long time...

How To Make Your Ammunition Last For Decades

9 Best Firearms To Have After SHTF

If you're a certified "knife-nut", then check out my new blog.
The Knife-Nut Blog HERE!

I think you'll get a kick of this (even if you don't sleep with a couple of blades under your pillow like me).

Posted by Poor Man Survivor at 6:34 AM

Good, solid info. A shotgun is a versatile tool; every prepper should have one along with a .22 [well paced shot will bring down small game & they're cheap to plink with}

Terrific and very useful given our times-thanks!

We strongly suspect leftists have screwed w/ this election starting with media & their failure to report anything negative about Biden along w/ their non-stop attack Trump narrative AND we know Soros has been behind much of that manipulation.

Given the many, many reports of chicanery in so many Dem run cities of fraud & interference I strongly suspect of Dems of the worst and why wouldn't this be true given their history of trying to take out Trump through impeachment, Russia hoax and non-stop media lies & smears. We may need a revolution to take back our nation.