The New Face of Hunger in America-Could it be you? 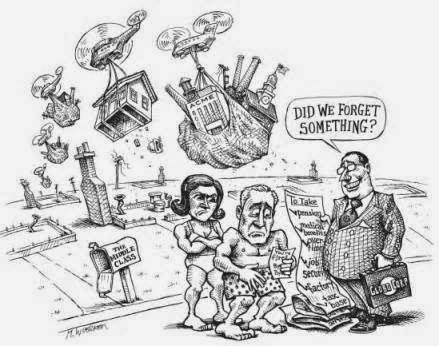 Maybe a person’s time would be as well spent raising food as raising money to buy food. ~Frank A. Clark


The New Face of Hunger:  We’re now seeing more formerly middle class families and even Ph.Ds and on food stamps at our area food banks…

Sara Bareillis played softly through the surround-sound speakers of my husband’s 2003 Mercedes Kompressor as I sat idling at a light. I’d never been to this church before, but I could see it from where I was, across from an old park, abandoned in the chilly September air. The clouds hung low as I pulled the sleek, pewter machine into the lot. But I wasn’t going to pray or attend services. I was picking up food stamps.


Even then, I couldn’t quite believe it. This wasn’t supposed to happen to people like me.


Are we all destined to become debt serfs?


I grew up in a white, affluent suburb, where failure seemed harder than success. In college, I studied biology and journalism. I worked for good money at a local hospital, which afforded me the opportunity to network at journalism conferences. That’s how I landed my first news job as an associate producer in Hartford, Conn. I climbed the ladder quickly, free to work any hours in any location for any pay. I moved from market to market, always achieving a better title, a better salary. Succeeding.


Politicians in DC get an automatic pay raise each year in addition to their gold plated perks…DO YOU?

Feds Report Historically High Proportion Of U.S. Population Is Now On Welfare »
The U.S. Department of Health and Human Services has released its annual report to Congress on Welfare Indicators and Risk Factors, and in its 165 pages is the revelation that more people, as a percentage of the population, are now on welfare than at any time since the department began tracking the figure.

The Decline of the Middle Class-Has anyone noticed?


Economists often state that the middle class is the engine of commerce, and industries from construction to education to consumer electronics rely on a strong middle class -- with large amounts of disposable income -- to build colleges, fill homes and buy over priced Smart phone and high priced concerts. But what if this massive engine ground to a halt?

Trouble on the Factory Floor

How did the middle class become second class citizens -- or, as Smith puts it, "Debt Serfs"? Not surprisingly, the answer is complicated, involving factors like the rising cost of education, Wall Street’s elimination of pension funds and affordable health care, declining middle class wages, and the skyrocketing price of housing, food and fuel. Yet one clear answer lies in manufacturing. When looking at the declining American middle class, a good number to start with is 42,400. That's the total number of factories that the U.S. lost between 2001 and the end of 2009. Put another way, this translates into the outsourcing of 32% of all manufacturing jobs in America.

Other numbers illuminate the impact of this massive job drain. At the end of 2009, 15.7 million people were unemployed, while 12.6 million -- 20% fewer -- worked in manufacturing. This represented only 9% of the American working populace; at manufacturing's height in 1960, 29% of Americans were employed in the sector. Today, three out of five people in a household no longer hold a job.

This bleeding of American manufacturing represents a massive drop in the products that are made in America: According to one economist, the country currently doesn't produce any television sets. Computer manufacturing in the U.S. employs about 166,000 people; in 1975, it employed almost 300,000. Meanwhile, Asia's computer manufacturing sector has about 1.5 million workers.

If the low wages, dangerous workplace conditions sounds familiar, it's because that describes the conditions in many American factories in the late 1800's and early 1900's. When the true rate of inflation is factored in, most Americans haven’t had a raise since the late 1970s.

This situation was largely remediated by the growing power of organized labor, which successfully pushed for minimum wage, collective bargaining, reasonable work weeks, and many of the other rights that today's workers enjoy. Yet, in the past few decades, "the unions" have become an all-purpose scapegoat for inflexible work rules and the rising cost of American-made goods, as low-cost overseas labor has led to massive outsourcing, led by General Electric in the mid-1980s. And in recent years, some of that reputation may be deserved. Yet the fact remains that organized labor did much to create the American middle class.

If the middle class is to rise to anything approaching its former power, American manufacturing must rebound. While the U.S. is still in the upper ranks of the world's largest consumers, its economy is rapidly slipping down on the global list. According to some economists, China's economy is on track to overtake the U.S. by 2040; ten years later, India will also outstrip America.

The solutions to surviving the war on the Middle Class can be found in our new e-book.

Posted by Poor Man Survivor at 8:12 AM