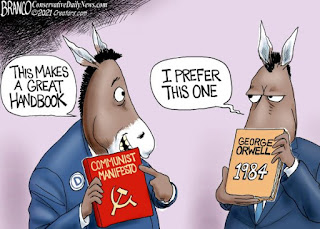 What Is to Be Done? A New Economic Model

What is to be done? Lenin’s 1902 question, posed as he was effecting his takeover of the Bolsheviks with an eye to absolute power in Russia, continues to echo down the decades. Lenin understood that first, the struggle for supremacy had to be won at the intellectual and theoretical level and then, when the moment was right, by direct action—i.e., violence.

In other words, the revolution had to be conceived and believed by the intelligentsia before it could be achieved. And, of course, it needed a leader.

In the United States, our own Marxist revolution arrived on our shores in the 1930s from Frankfurt in National Socialist Germany, when a handful of Marxist scholars—if one can dignify Marxism, a philosophy of resentful losers, with the term “scholarship”—were given refuge and immediately began their task of subverting the nation via their preferred brand of socialism: communism.

Their weapon was something called critical theory, and it went like this: everything about a culture (in this case, Western civilization) needs to be questioned, attacked, mocked, invalidated, and destroyed. That’s it. What comes after was and remains not their problem. Some men, after all, really do just want to watch the world burn.

As only something this juvenile could be, critical theory was taken seriously and introduced into the American university system, starting with Columbia in New York City, and from there, quickly spread like a cancer across the nation, especially once the 1960s got underway.

The death of JFK in 1963, racial unrest in mid-decade, more political assassinations in 1968, and, above all, the war in Vietnam and the rise of the baby boomers as they entered college proved the perfect petri dish for the destabilization and overthrow of the existing order.

Launching simultaneous assaults on our language, customs, history, art, literature, and institutions, the “progressive” left seized the high grounds of education, the media, entertainment, big business, and even science—which is why you now live in a world of multiple “genders,” men competing in women’s sports, sex-change operations for children, proscriptions on speech and freedom of association, and all the other blessings that the Frankfurters have spawned.

And how has Western civilization reacted? By welcoming them into its bosom, nursing and nurturing them, surrendering to their demands for “tolerance” and “diversity” without giving a second thought to exactly what is meant by those two terms or what the results might be. Nearly a century after their landing on our shores, their doctrine of critical theory has given us political correctness, “wokeness,” critical race theory, and a whole raft of cultural ills never dreamed of by the country that emerged victorious from World War II.

A Congress of Allies

So, what is to be done? Over the past couple of weeks, I’ve begun to lay out a program—in part, employing Leninist principles—to chart a restorative course.

Among the prescriptions so far: to complete Donald Trump’s capture of the Republican Party by purging what currently passes for “leadership,” which never accepted Trump’s 2016 victory and has fought a rearguard action against him ever since; and to primary and remove from office every single congressional representative who voted either to impeach the president or convict him and replace them with a MAGA representative.

Conservatives, by definition, are always playing black in the chess game of life (when, one wonders, are the “wokerati” going to go after that?), forced to react to whatever moves white makes as the game opens and develops. Similarly, the right is always drawing lines in the sand—this far, and no farther—but is consistently unable to defend the boundaries it has set and gets rolled over time and again.

Occasionally, there are a few victories, but for the most part, the history of modern America has been a long, slow slide to the left. There is too much dike to defend and too many holes already punched in it: no wonder the left feels so triumphal right about now. With just a handful of seats giving them control of both houses of Congress, they might as well have a mandate.

The GOP has, from time to time, tried to fight back, but it rarely chooses its battlefields wisely. One wing of the party still chants the mantras of the “free trade” (goodbye, jobs for high school grads), “private companies” (hello, international behemoth cartels such as Amazon and Facebook), “low taxes” (Amazon chief Jeff Bezos’s net worth: $196 billion), and other quaint maxims from when Milton Friedman was a pup.

And so, jobs vanish once more (Trump had brought many of them back), the middle class is crushed by income taxes as the tech moguls’ fortunes grow, and China laughs all the way to the World Bank as its slaves churn out an unending array of cheap plastic amusements, so that everyone can fiddle on PlayStation or Guitar Hero while the United States burns. 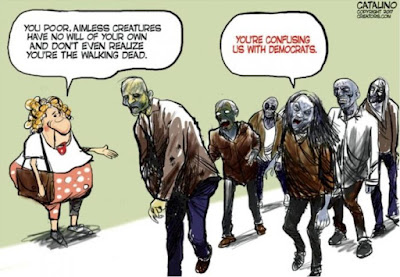 Therefore, Step 3: Understand that a new economic model is needed for a new era. Break up the tech companies before they swallow the country whole and regurgitate it into China’s lap. The 19th-century robber barons at least left behind infrastructure in the form of railroads and the towns and cities that sprang up alongside them. Of what use will your iPhone be a century hence?

Reform the tax code away from penalizing income (an outmoded, frankly Marxist view of wages left over from the must-repeal 16th Amendment) to some sort of consumption tax—the more you buy, the more tax you pay; frugality is thus rewarded. Institute a kind of percentage-based inherited wealth tax on the super-rich who have benefited more than anyone from the U.S. economic system and the liberties that attend it.

And while we’re at it, strip both the elite private universities (Harvard’s current endowment: $41 billion) and the churches and other religious institutions of their tax-free status, in part to stop them from gobbling up block after block of prime real estate in America’s major cities and then taking it off the tax rolls.

Republican protestations about the American Dream are laughable when, as everyone can plainly see, that dream is more threatened than ever. The toxic combination of state capitalism/fascism of the Chinese model, currently being engineered by members of both parties, and the hard-left cultural/social Marxism being enforced by obscenely wealthy enterprises and institutions will be the death of us if we don’t stop it—now.

Now, about that leader we need …

Michael Walsh is the editor of The-Pipeline.org and the author of “The Devil’s Pleasure Palace” and “The Fiery Angel,” both published by Encounter Books.

A Country That Has Lost Its Way: U.S. Government and Corporations Combine To Strip Citizens of Their Rights

In a statement on Sunday, the FBI called on Americans to participate in its program to prevent what it called “homegrown violent extremism.” The FBI told people to spy on their relatives and friends and report suspicious behavior. 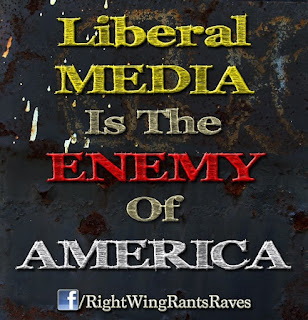 A handful of stocks are driving the indices higher, Apple worth $2.3 trillion, Microsoft $2 trillion, Amazon $1.8 trillion, Google 1.8 trillion, Facebook $1 trillion even that over priced pile of poop Tesla came close to being valued at $1 trillion, we are definitely in a bubble, you only need to go onto youtube and watch the to the moon videos of Cathy Wood, literally everything's going to go to the moon because her barely out of puberty Quants decree it to be so. This is clearly a major warning sign of a unsustainable trend when indices are ruled by such a small clique of tech stocks where the greatest similarity is with the dot come bubble in terms of the valuation of stocks that actually produce revenues unlike the largely worthless dot com's of that time.

Biden officials have noted that the price of gas is of interest to the administration and have pushed for talks with OPEC & Saudi Arabia in the hopes of reaching an agreement that would stem the rise in crude prices. It isn't hard to see that inflation concerns are far more than just transitory when you consider the political ramifications of the Biden administration getting involved in Middle Eastern oil dynamics to help control the impact of inflationary gas prices rising.

·         Most people are inundated with information, but it's usually a severe case of quantity over quality. It's important to remember: garbage in = garbage out.

I look for publications that have track records of being right the vast majority of time, especially in financial areas.  I’m sharing with you folks:

Share The FREE Independent Thinking StarterKit With Your Friends For Exclusive Rewards!

Give them your unique referral link below by copying and pasting your link to others or click on one of the referral type icons below. When they subscribe you'll receive EXCLUSIVE REWARDS that are not available anywhere else. To help you with this, here are 10 SHTF problems you might not have planned for.

1. You Run Out Of Toilet Paper - Even if you have a closet full of extra toilet paper, if the disaster is long enough you could still run out. There’s also the chance that your toilet paper will be destroyed in a fire, flood, tornado, etc. What would you do if any of those things happened...?

​12 Things You Must Take Care Of Before The SHTF

Millions Of Low Paying “Jobs” Are Available, But Most Americans Can’t Afford To Take Them

There are more job openings in the United States than ever before, but the vast majority of the available “jobs” pay so little that most Americans don’t want them.  If working extremely long hours for some employer is not even going to lift you out of poverty, then you are probably better off taking whatever government assistance that you can get until a decent paying job eventually comes along.  For example, if you get a job that pays 10 dollars an hour and you work full-time hours every week, you will earn somewhere around $1,600 a month before taxes.

Needless to say, you can’t survive in most U.S. cities on $1,600 a month these days.  It would have been tough to make it on $1,600 a month before the pandemic, but now we are in a highly inflationary environment.  Housing costs are absolutely skyrocketing, health insurance premiums are at extremely ridiculous levels and food prices have been rising aggressively.  The higher the cost of living gets, the less attractive low paying jobs are going to become.

Email ThisBlogThis!Share to TwitterShare to FacebookShare to Pinterest
Labels: Dems-Communists gutting the US-fight back

read animal Farm & 1984 by Orwell to see what is happening to America; most jack asses are asleep at the wheel in this country.

Biden is now the Communist in chief; when do we fight back? I don't promote violence but I'm having 2nd thoughts about all these damn liars in DC & the media-they need to be brought to justice.

Something wrong w/ lame stream media-are they all communists?