Although this is a newsletter dedicated to Prepper resources, I’d like to start off by sending my condolences to all the families who lost a loved one in the tragic condo collapse last week in Surfside, Florida…

We’re seeing inflation bites everywhere from your local hardware store to McDonald’s and the supermarket-your dollar buys less thanks to the vegetable [primarily] in the White House…Below are excerpts from a Romanian patriot demonstrating how to survive this hidden tax.

Lehel recently began creating a series of videos about his experience in Romania and what regular Americans can do to prepare for a potential hyperinflationary scenario.

Lehel recently began creating a series of videos about his experience in Romania and what regular Americans can do to prepare for a potential hyperinflationary scenario.

His latest video outlines his personal blueprint for preparing for hyperinflation. In today’s episode, I’ll outline the larger points.

Connections - keep the lines of communication open with family and neighbors

In previous videos, he laid out a rough timeline of Romania’s currency collapse:

→ Salaries rose (a little) to compensate for the “new normal”

→ Rationing began at the supermarket

→ The value of savings was destroyed

→ Loss of confidence in everything

Does any of that sound familiar? Perhaps.

His latest video outlines how the elite get richer in hyperinflation… and how you can, too.

The Paradox of Prepping

Lehel initially had reservations about making this video. As he mentioned, most people in Romania got rich off of the misery of others during hyperinflation. “So, unfortunately,” he said, “telling you the stories, I was thinking that maybe I’m training you to become rich on people's misery.”

But, on the flipside, ignorance is why people get bilked through hyperinflationary periods. Before it hits, they don’t realize what is happening, assume everything will go on as it has, and get destroyed because they did nothing to prepare.

The more people there are “in the know,” the more dynamic the market, the less gruesomely tilted it is in the whale’s favor.

The paradox of crisis preparation is that if everyone prepares for a major crisis, the major crisis never manifests, at least not with the severity it would have. Financial crises happen due to a lack of confidence and a lack of alternatives. “Preppers” are just anticipating the day when they can no longer trust in the systems, so they preselect alternatives. Those who don’t preselect alternatives are forced to compete with everyone else for what’s left.

“Technically,” says Lehel, “if everyone were ‘in the know’ that this scenario could happen, then nothing would happen. Everyone would be prepared.”

Unfortunately, this typically never happens. Most people will hold onto their normalcy bias until the bitter end when crises create zero-sum outcomes.

In a well-functioning, free economy, wealth-building is not a zero-sum game. Contrary to popular thought, it is not required for wealth to be acquired by means of making someone poor.

In a healthy, accessible (free), and dynamic economy, a rising tide can indeed lift all boats. A healthy economy is built on ideas, discoveries, ingenuity, and elbow grease. And the former three things are infinite. The pie of wealth expands as new ideas, products, and services are brought into the market, thriving not by coercion but on consensual transactions, agreements, and voluntary actions.

Moreover, during the inevitable sharp downturn, economic activity slows far more than it would during a healthy recession, often devolving into a crisis. During a crisis, economic activity grinds to a halt, and those with wealth can scoop up assets from those without money for a pittance.

In 2008, if you still had your shirt and sanity, it was the easiest time to set yourself up for incredible wealth by taking what others couldn’t afford to keep.

You prepare for a crisis, says Lehel, so that you can “compete for the remaining assets that remain in hyperinflation against some of these big sharks.” You get rich by being nimble and staying one step ahead of the herd.

How to Get Rich

Lehel recalls all of the stories from Romanians who also lived through that time. Most of them went something like this:

“I remember my father and mother were saving up for a house during that time. Eventually, they were only able to buy a shoe, a bicycle, or a TV set with that money.”

The stories hit home. His own relatives had enough money to buy two houses before hyperinflation hit. Not long after, however, that money could only buy a black-and-white TV. 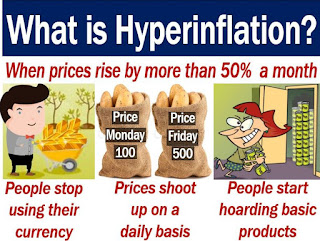 In a hyperinflationary scenario, the price of everything is going up while the value of the currency is going down.

The way you get rich is by sitting on the sidelines as the market bleeds out, waiting for the right time to pick up assets for a song. But, obviously, you don’t want to sit on the sidelines with the failing currency.

The question then is, what’s a proper “sideline” investment? “In our case, in Romania,” says Lehel, “it was other currencies because our hyperinflation was local hyperinflation. While it wasn’t technically local -- a lot of other Soviet satellite states went through similar problems -- there were other Western European countries, the United States, and other countries whose currencies weren’t affected.”

In the ‘90s, sitting on the sidelines meant that you were in German deutschmarks or US dollars. From the perspective of those holding these currencies, house prices in Romania were plummeting.

The same can be said for those who’ve held bitcoin for the past five years. Though in dollars, house prices are flying through the roof, in bitcoin, they’re dropping.

Although tempting, Lehel advises steering clear from leverage. Though it might seem obvious that the dollar is headed down, the market can remain irrational longer than you can remain solvent.

Of course, one of the safest ways to “sideline” and preserve your wealth in the meantime is precious metals.

Gold and silver will be the first to disappear during hyperinflation.

If hyperinflation hits, in fact, there might be a time where you can’t get gold and silver for any price. And, when the time’s right, people will be willing to trade other assets for your precious metals.

It’s as close as you can get to a “sure thing” when it comes to preserving your wealth. That way, you’ll be able to sideline your money for the right opportunity when it arises.

Victor Davis Hanson // American Greatness This Fourth of July holiday we might pause for a moment from our festivities to ask how we collectively lost our minds over the last 15 months—and are we yet regaining any semblance of our sanity?  A pandemic caused by the leak of a Chinese-engineered virus and its coverup […]

Today in America, every pillar of sustainable civilization is being ripped to shreds: The rule of law, the family, logic and reason, the First Amendment, and even the very concept of due process.

It's all part of an effort to take down America so that the U.S. Constitution can be nullified by globalist interests. After exterminating billions of humans, they want to rule over the survivors via global government.

Like a building with a broken foundation, America is about to shift into the "gravity free-fall" collapse scenario, which will likely start with banking and finance.

Get the full details in today's feature article and podcast right here.

Let’s be honest; times are scary right now, and everyone is talking about the upcoming economic collapse. Whether or not it happens for real, we won’t know until it does, but it’s wise for everyone to prepare with some must-have items for the coming chaos. It’s not entirely out of the realm of possibilities.

In recent years, Greece and Venezuela experienced economic collapses, and the empty shelves during the Covid crisis strengthened the concerns. Our food supply chain is delicate, and we all know now that vulnerabilities increase the likelihood that stores will empty quickly.

So, how can you prepare your family for the coming chaos? You start with making sure your stockpile has these must-have items ready to go...

​21 Must-Have Items for the Coming Chaos

My parents grew up in Germany & saw the destruction of inflation to their money; wheel barrels of cash were needed to buy basic items and the use of barter became widespread.